View of the apse of the Cathedral of Saint-Jean by Sona. In the background, Notre Dame de Fourvière and metal tower Fourvière.

Construction began in the XII century on the site of the ancient church of the Merovingian era. The lower part of the apse was erected on a 1180 year. The cathedral was expanded and being completed within a few centuries. Construction of the main facade began in the XIV century, and completed in 1481. For him, the stones used, are here remaining from previous constructions Roman, destroyed in the IX century. In connection with the duration of construction, East, the oldest part of the temple, converted to Sonia, comprising apse and chorus, It was performed in the Romanesque style, and the newer west, including the main facade, - Gothic.

The cathedral was devastated by Huguenots in 1562, later restored.

During the Great French Revolution was rebuilt choir, Cathedral has undergone revolutionary vandalism.

The most important church in Lyon:

In the historic heart of Lyon, Located between two rivers, is a Benedictine Romanesque church - the Basilica of St. Martin d'Enay. Its architecture is not very remarkable, and is a mixture of pre-Romanesque, Romanesque and Gothic styles

Nonetheless, Basilica is worth a visit, as it is one of the oldest churches in Lyon, built in 1107 year and has become an illustration of, how important at the time had a defensive function, even in churches! 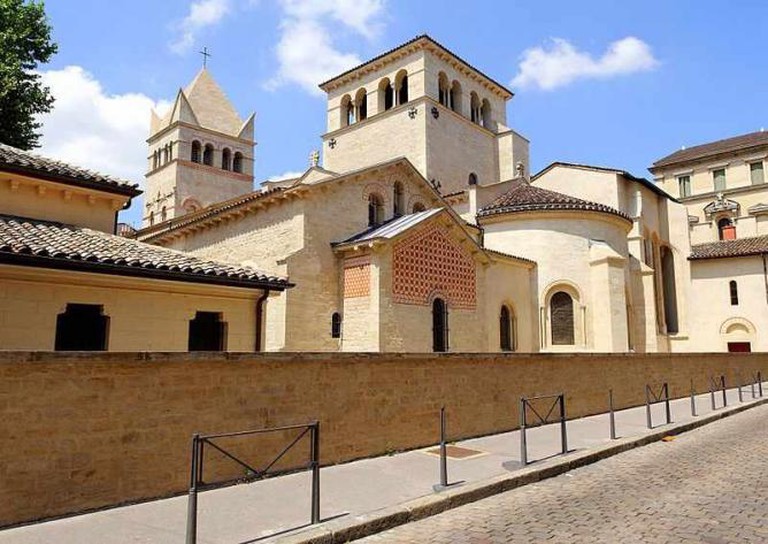 During the French Revolution, the church was used as a granary, what, undoubtedly, d'Enay saved from destruction. The church was renovated and enlarged in the XIX century in the style of Romanesque Revival, as it looks today.

Church of Saint-Georges (St. George Church) located on the banks of the Saone River in the tourist district of Lyon - "Old Lyon" (Old Lyon). It is decorated with a large part of photographs and postcards with views of Lyon: 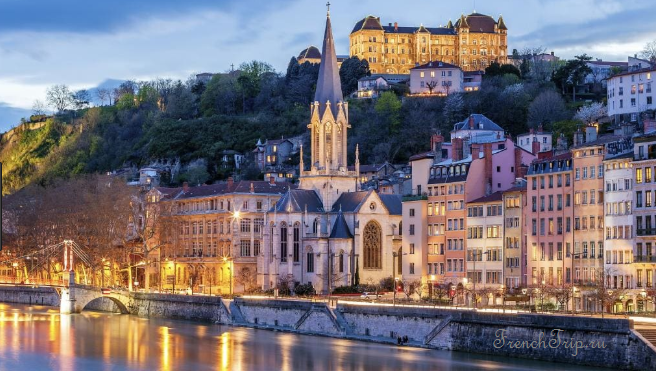 This church had a rich history. The original temple on the site was built in 550 year, It destroyed about 732 year and restored 802 year, and at some point even used as a barn for hay. Church of Saint George has been restored at the end of the 19th century by Pierre Bossanom in neo-Gothic style. The architect also designed the furniture, you can see inside. Another attraction in the church - the altar of the 16th century depicting the coronation of the Virgin.

Cathedral of St. John the Baptist in Lyon

Cathédrale Saint-Jean-Baptiste de Lyon - Romanesque and Gothic cathedral of the XII century, the construction of which took more than four centuries. Cathedral of Saint-Jean-Baptiste de Lyon is famous for its beautiful original stained glass windows. However, interior of the cathedral is not so impressive, as architecture outside. Nonetheless, it is praised for its simplicity and a sense of austerity, that it causes.

If you decide to visit St. John the Baptist, be sure to wait for the fight of his astronomical clock, which will be triggered every day at noon, at two, three or four days: their moving figures depicting scenes of the Annunciation.

Basilica of Our Lady of Fourviere (Basilica Notre Dame de Fourviere), built in 19 century private funds, located on the top of the Fourviere hill, and with its North Tower panorama Lyon 180 degrees. 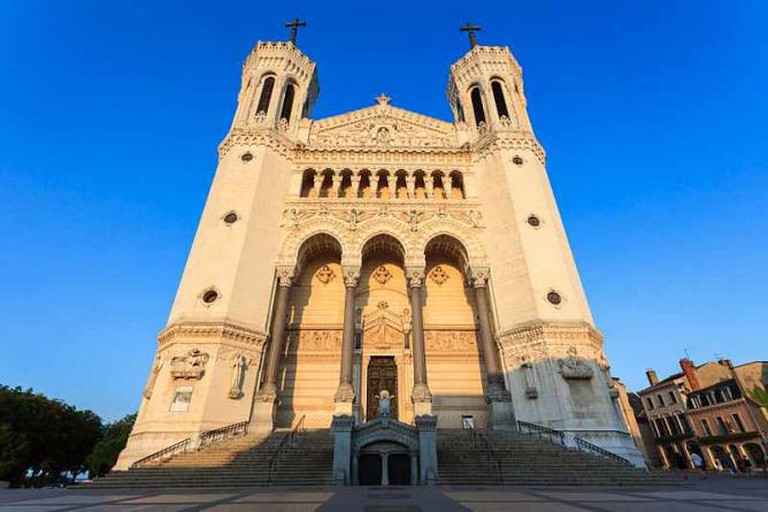 From the church, tourists can walk to the gardens Rosier, from whence also offers scenic views of Lyon. Basilica is built in the Romanesque and Byzantine style by architect Pierre Bossano, who designed the church of Saint-Georges. Temple must visit because of the ornate interior, its stained glass windows and mosaics are truly a miracle.

Construction of the church Saint-Nizier (Eglise St Nizier) It goes back to V century. For centuries, the church was set on fire several times and broke. The church building, we see now, It was completed as early as 16 Century Gothic.

Church of Saint-Nizier is not so impressive, neobыchna or spectacular, like other churches above. But this temple is simple, authentic and is great to visit for a soothing and beautiful Sunday Mass.

Cathedral of Santa Maria de la Regla, also known as Pulkra Léonin or Light House, – the main church of the city of Leon in the north-west Spain. The cathedral was built on the site of Roman Baths 2nd century, who in the 11th century by order of King Ordoño IIbyli transformed into the palace. The construction of the cathedral began in the very middle of the 13th century by the architect Enrique, and it was finally completed by the end of the 16th century. In 1844 the building of Santa Maria de la Regla was declared a historical monument, and today the cathedral is considered a masterpiece of Gothic architecture.

The main facade of the cathedral attracts the attention of two towers, while the southern is known as the Clock. Three portals decorated with sculptures, located in the lancet arches between the towers

The central section of the facade also has a Gothic rose window.

Inside the cathedral, the space behind the main altar, decorated in the Renaissance style, remarkable sculptures of alabaster work Huskina and Juan de Malinasa

Also pay attention to the iron bars («REHA») Plateresque in style on the wall of the tomb of King Ordoño and stained glass, the total area of ​​which is almost 1800 sq.m.! Most of the stained glass dates back to the 13-15 th centuries - a real rarity for medieval Gothic churches

The main chapel of the cathedral is decorated with an altarpiece Nicolas Frances 15th century and a silver urn with the relics of the saint Froilana, the patron saint of Leon. In kluatre, built in the 13-15 th centuries, you can see the sculptural elements on the capitals, Strips and detention. The Cathedral also has a museum, which houses a large collection of religious works of art - almost 1500 exhibits, including 50 Romanesque sculpture of the Virgin Mary, from antiquity to the 18th century, as well as the Dutch triptychs, ancient bible and numerous manuscripts, including the first manuscript on Leonean language.

Existing astronomical clock, located in the Cathedral, - the oldest in France. They trace their history from the XIV century. After destruction Huguenot, restored according to 1600 year. Its Baroque appearance they acquired 1655 year. In the XVIII century they had a minute dial with arrow. Despite numerous repairs and alterations, clocks contain some iron parts, melted at the end of the XVI century.

show clock, minutes, the date, the position of the moon and the sun relative to Earth, as well as the brightest rising stars on the Lyon.

Four times during the day (in 12, 14, 15 and 16 hours) is heard ringing hours, followed by movement of automatic dolls, located in the top of the hour and depicting scenes on religious themes. 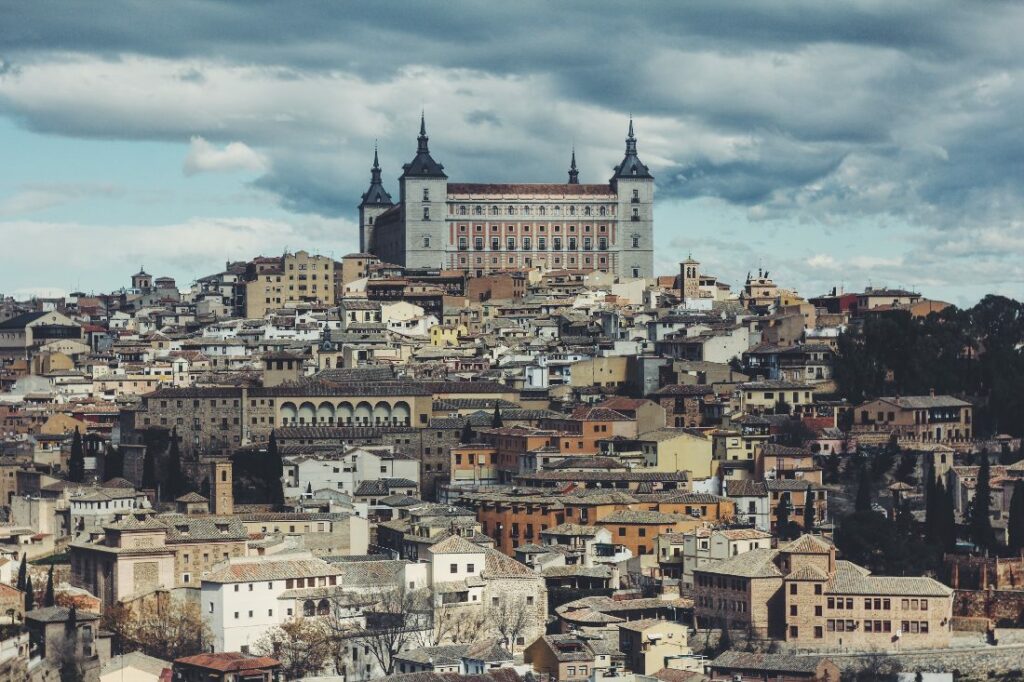 Distance from Toledo to Madrid
helpful hints: Madrid Toledo how to get away
189 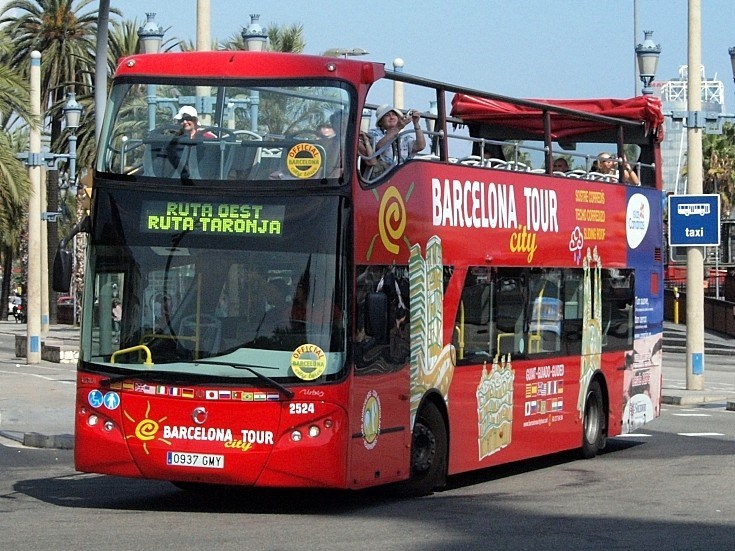 Which of the resorts in Spain for a holiday with two 4-6 year old children in October?
Sea and autumn festivals all over the world it is time to start
171
Port Aventura restrictions on growth
Subject area "Mexico" Next Theme
140 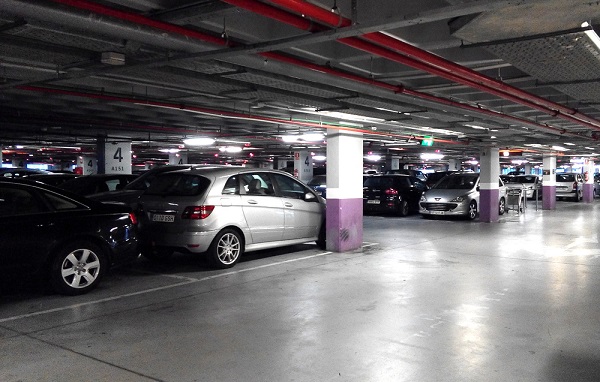 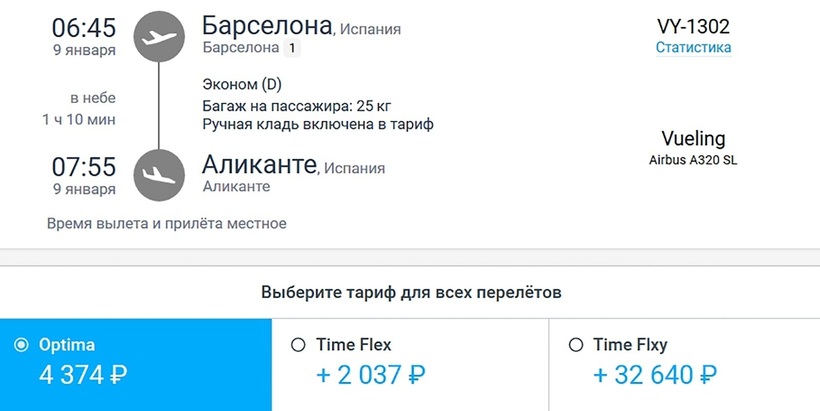 How to get from Moscow to Alicante
Eat two train We offer the most convenient and cheapest route.
151